The Road’s Not Easy…

Travianna Records is happy to announce the upcoming album by Ash Breeze set to be released in early summer. The band has taken Travianna’s motto of “Music. No Boundaries.” to heart as they’ve worked to create a project that expresses their own unique musical diversity. Ash Breeze fans will also enjoy news of the band’s selection to showcase in the 2015 International Bluegrass Music Association’s (IBMA) Bluegrass Ramble in Raleigh, NC in the fall. Ash Breeze will be featured at the event as one of acoustic and traditional music’s most promising talents. 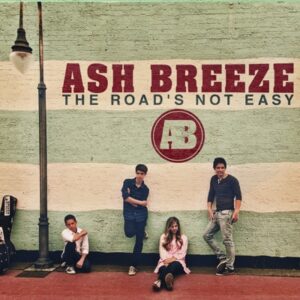 Although they are considered a ‘family band,’ Ash Breeze is not your typical one. Coming from Fayetteville, NC, the group consists of four charming and equally talented siblings, Nellie (fiddle), Corey (guitar), Luke (banjo) and Eli (mandolin), with their father, Allen holding them together (literally and figuratively) on the bass. Growing up, the kids were classically trained at home, but switched their focus to bluegrass and acoustic music in 2010. Ash Breeze signed with Mountain Fever Records in 2013, and after a successful self-titled release featuring many tracks written by  group members, Mountain Fever’s President, Mark Hodges noticed the group had interests that stretched outside of the bluegrass genre. In addition to classical, the band’s musical influences also include folk, jazz, blues and gospel music. This diversity made Mountain Fever Record’s sister label, Travianna Records the perfect home for the group.
Ash Breeze has a sound that can be related to an old soul. For their age, the band members have a rich a mature style, that coupled with the optimism and energy of youth creates a compelling sound. Ash Breeze has performed at festivals all over the United States and Canada.  Nellie, Luke and Eli have competed and won in their divisions at the Galax Fiddlers Convention in Galax, VA. Their 2014 single Without Love was chosen as a Top 5 finalist in the 2014 Christian Gospel category at The Great American Songwriting Festival and was a Top 3 finalist in the Chris Austin Song Contest at Merlefest 2014.
Music enthusiasts will find it interesting that Corey Smith is the Producer of Generation Bluegrass, a video bluegrass project highlighting some of the brightest young talent in bluegrass music.

Nothing But Sky from Delta Reign ! More Rave Reviews Pour In For Delta Reign