AllAboutJazz.com featured review By MIKE PERCIACCANTE
Below is a short excerpt and a link to the full story.
On an unseasonably cool late July evening, Mustered Courage was booked at New York City’s Hill Country Barbecue at the downstairs stage in the Boot Bar. Hill Country 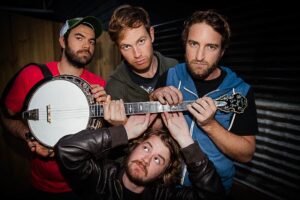 Barbecue might sound like a strange place for a concert. It most assuredly is not. The smoked and grilled meat mecca’s stage has a state-of-the-art sound system and has welcomed and seen performances by artists such as Dale Watson, Bob Schneider, and Rosanne Cash.
Mixing honky tonk imagery with bluegrass picking, guitar, banjo and/or mandolin strumming, bass plucking, a touch of Aussie humor, charming four-part harmony and top-flight musicianship, Mustered Courage owned the small stage. It has style, stage presence and tons of talent. With a mix of dark and bright lyrical forays, layered over banjo-dominated upbeat music, Mustered Courage is a band that screams to be noticed. Though Australia is not generally known for bluegrass music. Mustered Courage may quickly change that perception. Mustered Courage at Hill Country Barbecue—it was finger pickin’ good!
Read the entire story HERE

Mustered Courage to Travianna Records Nothing But Sky from Delta Reign !