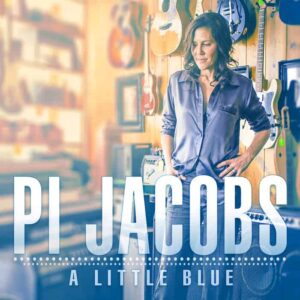 From the SONOMA COUNTY GAZETTE:
On Saturday night (May 6), locally grown musician Pi Jacobs returned to Sonoma County to the Redwood Café in Cotati, playing a solid set of her signature“Americana bluesy rock thing” to a roomful of fans and local supporters.
It was something of a homecoming for Jacobs, who was born in San Francisco and grew up in Graton, so it was fitting she began the nine-song set with a song about going home.
Although she now lives in Los Angeles, the influence of her formative years was stamped on her musical styling. Accompanying herself on the guitar, her voice was powerful, filling the room at times, though sweet and soft by turns.
Jacobs was born Lisa Marie in the Haight-Ashbury district of San Francisco, but her mother, Hilary Moore, moved to Sonoma County to a house on Green Valley Road, when the girl who would become Pi was in third grade.
She attended Oak Grove Elementary and El Molino, but left high school for Santa Rosa Junior College in her junior year, after receiving her GED. From there, Jacobs went on to get a music degree from San Jose State University.
Her mother knew from an early age that Jacobs would be a singer.
“I knew from the time she was about 6 months old that she was going to be a singer,” Moore said. “We lived at Haight and Masonic and there was a lovely woman who would always say ‘bye’ to her when we’d get on the bus. I heard her saying ‘bye’ with the same intonation and realized she had an ear.”
Moore’s music collection included “rock- and soul-heavy music,” and she would sing tunes from artists such as Joan Baez to her daughter, but it was in pre-school that Jacobs’ star began to shine.
“It really started at the age of three, when she came home from pre-school and told me they were going to have a concert,” Moore said. “I didn’t realize she was going to sing and she did a solo of ‘Silent Night.’ My response was to burst into tears.”
As a teenager, Jacobs eventually picked up the guitar and bass and began writing songs. After college, a period of “woodshedding, gigging and recording ensued,” and in 2001, Jacobs released her debut album “Irrational.” That is when Lisa Marie became Pi.
“When we taped that first record in 2001, my lawyer told me I can’t be Lisa Marie and had to come up with a name,” Jacobs said. “My guy came home one day and said he was going to get [the number] pi tattooed around his bicep. I nerded out and decided to put it on the record. But I decided if I’m going to be Pi, I might as well go all the way. Even my mom calls me Pi now.”
The guy, Josh, eventually became her husband.

After the release of her album, she spent two years in New York before landing in L.A., which she says has proven fertile creative ground and a convenient base for touring.

“That was the beginning of being a professional musician,” she said. “I tried to quit a few times, but was talked back into it.”

The move to L.A. was difficult, and she went there “kicking and screaming because [she] was raised to hate L.A. After awhile, I found a niche and people,” she said. “There is a lot of opportunity in the area.”

Now Jacobs gets up to Northern California a few times a year to visit her mother, but doesn’t get to play here as often as she would like. “I’ve played a little up here, but I wasn’t plugged into the music scene,” she said. “I’m just back from New York City and a tour of the southeast, but it’s nice to stay in California.”

Her most recent release is titled “A Little Blue,” on Travianna Records out of the tiny town of Floyd, VA. It is her seventh commercial release and can be found at www.pijacobs.com.