Delta Reign, from the Mobile River delta region of the Gulf Coast, is bringing a fresh new sound by incorporating swing rhythms, blues and a dash of jazz… Delta Reign proudly joined the Mountain Fever Records family in June 2012 and has recently transferred to Travianna Records (a part of Mountain Fever Records) to make their presence known in the world of Americana.

As 5 rivers flow together into Mobile Bay to form the delta, so Delta Reign formed in the fall of 2004 bringing together the musical influences of each member…bluegrass, western swing, blues & jazz… it’s being called, “swinging bluegrass”. (or ‘delta bluegrass’)  and has evolved into a distinct musical personality that appeals to listeners across many genres. 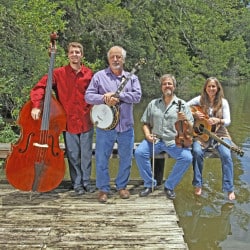 Founding members, husband and wife duo, Pat and Benita Murphy, from Mobile, have traveled around the country, performing together (and separately) over the years in various bands from Alabama, Louisiana, Florida, Virginia, Maryland and Washington D.C. After Hurricane Ivan came through the gulf coast in the fall of 2004, bringing change to their lives, they decided to
form their own band Delta Reign.
Benita sings most of the lead vocal, is the principle song writer and arranger, as well as being a strong and capable rhythm guitar player. She also switches to swing rhythm during the show contributing to that “swingy, delta grass” flavor.
Pat is a solid, driving, and innovative banjo player who occasionally switches over to play some dobro. His creative influence in the arrangements help gives the band its unique sound. He and Benita have been singing together for many years where they have developed the tight blend and phrasing of “family” style harmony.
George Mason on fiddle, comes to the group from Harrison, AR where he grew up on bluegrass when he started playing the fiddle at 8 years old.  He grew up going to festivals all over the region where he spent countless hours honing his skills. He then went on to perform with major touring acts, as well as working as musical director for the Osmond family for six years.  He joined the Murphy’s in May, 2010 rekindling interest in his roots.  He is not only a very impressive fiddle player and songwriter, he also sings some of the lead vocals and with his great tenor voice  that blends beautifully with the Murphy’s and adds a new dimension to Delta Reign’s unique sound.   .
On upright bass is newest member, Joshua Faul from Gulfport, MS.  Although a musical prodigy and a fast learner, Josh is new but, experienced in may diverse genres of music including jazz, afro-Cuban, rock, religious and musical.  Josh anchors the band with innovative playing and lays a solid groove.
“Calm Before the Storm” is Delta Reign’s debut album on Mountain Fever Records. The album is a finely crafted project of twelve songs offering listeners a virtual ride through the musical countryside of Alabama’s Mobile River delta region of the Gulf Coast. They will be visiting our own studios this summer to create their next musical presentation.